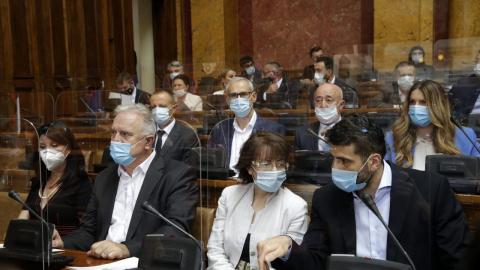 In 2018, the Belgrade-based Humanitarian Law Centre filed a criminal complaint accusing Andric of ordering "the 'eviction" of the Bosniak population from [the town of] Zvornik" on May 28, 1992.

"A few days later, on May 31, 1992, Andric issued an order to establish the Susica [detention] camp in Vlasenica. The camp existed until September 30, 1992, and during that period, the detainees were kept in inhumane conditions - they slept on concrete, received one meal a day, and did not enjoy basic hygienic conditions," the Humanitarian Law Centre said in a statement.

"Most were beaten daily, while the women who were detained in the camp were raped. Around 160 detainees were killed," it added.

"Also, in May and June 1992, the brigade commanded by Svetozar Andric persecuted Bosniaks from more than 20 villages in the Vlasenica municipality. In March of the following year, members of the brigade of which Andric was commander burned the village of Gobelje in the municipality of Vlasenica," the statement also alleged.

Andric denied committing the alleged crimes when he testified at the trial of former Bosnian Serb military chief Ratko Mladic in The Hague in 2015.

Before becoming an MP, Andric was a deputy leader of the New Belgrade municipal council.

Other candidates who have been convicted or accused of wartime crimes also ran...