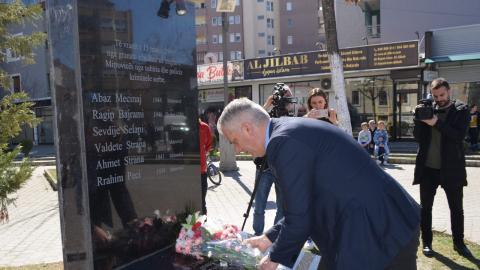 The Council for the Defence of Human Rights and Freedoms, the municipality of South Mitrovica and the Kosovo Academy of Sciences and Arts provided data about six innocent citizens killed, all of whom were ethnic Albanians.

However, domestic and international newspapers from that time and reports by international non-governmental organisations gave quite different figures, as some of those wounded in the massacre later died in hospitals in Mitrovica and Belgrade.

Regardless, nearly every story in the press at that time reported that one of those killed in that massacre was a five-year-old child, although the gender and ethnicity was never specified. A photo taken by photographer and journalist Tyler Hicks from the New York Times also documented the fact that a child was killed in the Green Market massacre.

Based on data from the Humanitarian Law Centre, we can pinpoint the identity, the gender and the ethnicity of the child: her name was Elizabeta Hasani, a Roma girl, born on May 11, 1994 in Italy, to parents Isa and Nada Hasani.

Therefore, a total of seven innocent victims were killed in the Green Market massacre. But the memorial plaque in the centre of the city, installed by the municipality of Mitrovica in March this year, only lists the names of the six ethnic Albanians killed. Elizabeta Hasani is not listed.

After discovering this on August 2, 2020, unaware that it was Roma Holocaust Memorial Day, I posted a comment on Facebook about my findings.

Journalists, commentators, social and political activists, scientists and many indignant citizens reacted to the post, as did activists and civil society organisations in Mitrovica. All had the same request: that all the victims of the war be commemorated without...