Measures not taken into consideration during Eid, minister says 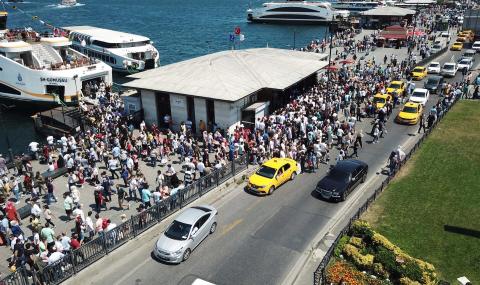 Measures taken against the coronavirus have not been taken into careful consideration during the Muslim holiday of Eid al-Adha, the health minister has said.

"We are concerned about the rise in the number of cases throughout the country in the coming days, which had been previously limited to some provinces," Fahrettin Koca said in a tweet.

On Aug. 2, Koca had expressed his concerns over the lack of measures during Eid al-Adha and said its possible results would be seen in the coming days.

Meanwhile, members of the Coronavirus Science Board emphasized that COVID-19 is still effective and threatens human life.

Stating that the measures were not taken into consideration at the desired level during Eid al-Adha, Mustafa Necmi İlhan, a doctor on the board, said the biggest problem is seen at squares, beaches and public transportation vehicles.

"We have seen that the two-meter rule between sun loungers on the beaches has been violated, many people do not wear masks and sit very close to each other. We have seen citizens who violate the rules on public transport such as ferries and trams," İlhan said.

Noting that crowded Eid al-Adha visits are encountered, he pointed out that there will be an increase in the number of new cases in the coming days.

"Case increases as a result of violations today will be reflected on the table after nearly 10-15 days. Especially for [last] four days, the cases have been going up. One in 20 patients is seriously ill," İlhan said.

"Not seeing 1,500s [number of new cases] again depends on compliance [to the rules]. We should never give up the measures," he added.

"We make the warnings all the time, but there was complacency in the public. As if it is not taken very seriously...