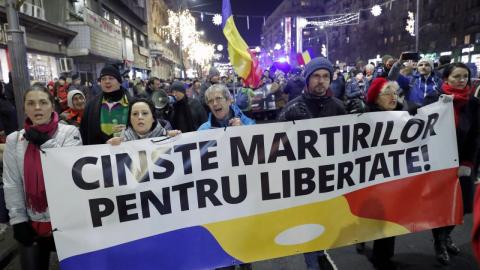 The Romanian Institute for the Investigation of Communist Crimes, IICCMER, has opened an investigation to identify border police officers who shot at Romanians trying to illegally cross over into Yugoslavia and Hungary in the Communist era.

"We don't have exact statistics, but we are certainly talking about thousands of people who lost their lives, shot by border officers while trying to leave for the West," Alexandra Toader, the president of the IICCMER, told Romanian news channel Digi24 on Monday evening.

"Those guilty are not only the border officers who resorted to violence, but also those who gave the orders," explained Toader.

He added he was confident that the investigation would be a success. "I am heartened by the fact that such actions have been carried out in other states that have gone through totalitarian regimes," he said.

Toader noted that "hundreds of thousands of people tried to cross the border between 1948 and 1989" - the years during which Romania was governed by a Communist dictatorship that completely banned emigration.

"From 1989 alone, we have reports of approximately 50,000 illegal attempts to cross the border," he said.

According to Toader, many of those who committed crimes at the borders with Yugoslavia and Hungary in the late 1980s could still be employed at the Interior Ministry even now.

The investigation will prioritise crimes occurred in the 1980s, as the chances of identifying perpetrators and bringing them to justice are higher.

Founded in 2005, the IICCMER is a government body tasked with studying the Communist dictatorship.

In recent years, its investigations helped to convict Communist-era prison commanders Ion Ficior and Alexandru Visinescu of crimes against humanity.