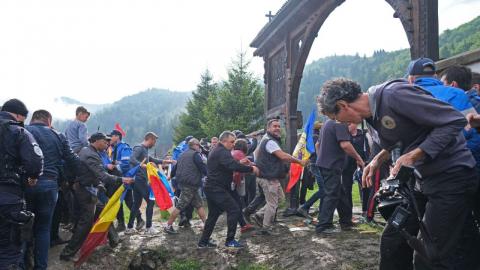 A prosecutor in the city of Moinesti in Romania's Bacau county has closed the case against ethnic Romanians who clashed with ethnic Hungarians over the instalment of Orthodox crosses at a cemetery for World War I victims in the village of Valea Uzului in June 2019, saying he did not regard the chanting of "Hungarians out of the country" as incitement to hatred.

Prosecutor Daniel Galbeaza argued that in order to be classified as hate speech, the chant should have been "directed at a category of people (for example, disabled people, homosexuals, etc.) and not an ethnic group", Romanian media quoted the prosecutor as saying.

The prosecutor also quoted several witnesses who maintained that the ethnic Hungarians at the cemetery "had an attitude that instigated violence while Romanian citizens did not respond to these provocations".

This was accepted by Galbeaza despite both the ethnic Romanians and ethnic Hungarians involved in the incident being Romanian citizens, and despite pictures that show the Hungarians peacefully praying in silence at the cemetery while the Romanians shouted nationalist messages at them.

Tensions rose at the Valea Uzului (Uzvolgy in Hungarian) cemetery in the Transylvanian county of Harghita, where ethnic Hungarians make up the majority, after local authorities erected 52 Orthodox crosses commemorating fallen Romanian soldiers inside the graveyard, one of the largest World War I memorial sites in the area.

Hungarians reacted by covering the Orthodox crosses with garbage bags, and subsequently gathered at the cemetery to pray while forming a human chain to protect the space.

A group of Romanians carrying icons and flags then broke into the cemetery to confront the Hungarians.

The Romanian authorities had...