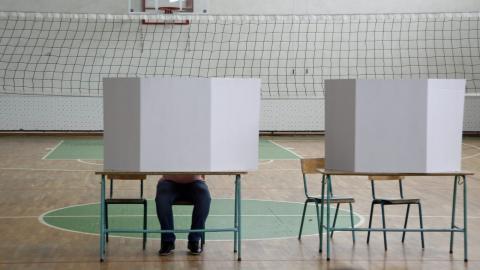 Migrants wait to be registered at the registration camp in Presevo, Southern Serbia, 2015. Photo: EPA/Zoltan Balogh HUNGARY OUT

The growth of the political right and the increase in right-wing narratives can be attributed to a number of reasons. First, the 2015 migrant crisis stirred up the ghosts of authoritarianism and nationalism. Second, uncritical media outlets quickly recast the global advance of populism as a seductive story of countries "fighting the establishment in defence of national sovereignty".

Third, one specifically Serbian reason has been the slowdown in the country's European Union accession negotiations, which has created space for "alternative" political offerings and narratives.

Where locals come into close contact with migrants, such as in towns hosting reception centres, the Serbian public has exhibited social distance towards them. At the same time, social networks have been used to spread right-wing narratives about the alleged dangers that migrants pose to the local population.

These narratives are only sporadically condemned in public. By contrast, tabloids exploit them uncritically for sensationalist, attention-grabbing headlines.

The most fertile ground for right-wing ideas by far is found on social media - the source of populist policies throughout the world - where these narratives consistently walk the razor's edge between legitimate ideas and conspiracy theories and fake news.