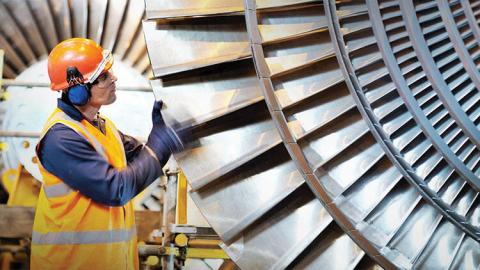 Turkey's Purchasing Managers' Index (PMI) for the manufacturing sector in July rose to its highest level since February 2011, according to a closely-watched business survey on Aug. 4.

IHS Markit's monthly purchasing managers' index - prepared in collaboration with the Istanbul Chamber of Industry - reached 56.9 in July, up from 53.9 in June.

The main reading signaled a strengthening recovery in the Turkish manufacturing sector following a downturn between March and May after the novel coronavirus pandemic erupted.

Turkey's PMI for the manufacturing sector is seen as an important gauge in tracking the health of the sector, with values below 50 points showing contraction while those above indicate expansion.

The survey underlined that July saw sharp rates of expansion in both output and new orders, with capacity pressures emerging and firms taking on additional staff, fueled by eased COVID-19 containment measures.

It added that the rate of expansion in new orders was among the fastest since the survey began in June 2005.

Higher production requirements led to increases in employment and purchasing activity, with both rising to greater extents than in the previous month, it noted.

"The growth will help to claw back some of the output lost during the downturn, but will have to be sustained for a longer period for a full recovery to be secured," said Andrew Harker, Economics Director at IHS Markit.

Commenting on the findings, Turkey's Treasury and Finance Minister Berat Albayrak said they were a "historic milestone" that strengthened the positive expectations for the second half of the year.