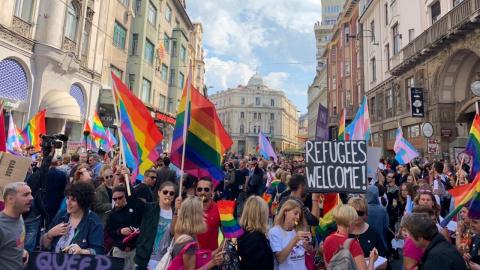 Bosnia's official Islamic Community has refused to comment on a homophobic post by a Sarajevo imam who thanked God and the coronovirus outbreak for cancelling this month's Pride march in the Bosnian capital.

Muhamed ef. Velic, imam of the Ottoman-era Ferhadija mosque in the historic centre of Sarajevo, wrote on Facebook on Thursday, after the organisers cancelled Sarajevo's second Pride march, scheduled for August 23, that "in every misfortune and tragedy there is a grain of happiness, goodness and beauty".

"Thanks to Allah for everything. Let dear Allah gift that corona and gay parade never return to our city and the state!" Velic, who is followed by some 73,000 people, wrote in the post, for which he received 36 comments, all but one affirmative.

A spokesman for the Islamic Community of Bosnia and Herzegovina, the IZ BiH, said it was not aware of the post, and added the community does not regulate all the work of its imams.

"We don't have any reaction, you will have to ask for that from his superior," IZ BiH spokesman Muhamed Jusic said, adding that the position of the community was that homosexuality goes against Islamic beliefs and teaching, but that believers should also refrain from any violence against such sinners.

While the faith community declined to get involved in the row, various well-known figures in Bosnia, such as the lawyer and former journalist Senad Pecanin, condemned the post unreservedly. Pecanin wrote on his Twitter account that the imam was "fascist scum".

Velic is known for his controversial posts. Last month, he criticized Turkey's re-conversion of Istanbul's famed former church and museum, the Hagia Sofia, into a mosque, in contrast to Bosniak and Islamic Community leaders, who mostly stayed silent...