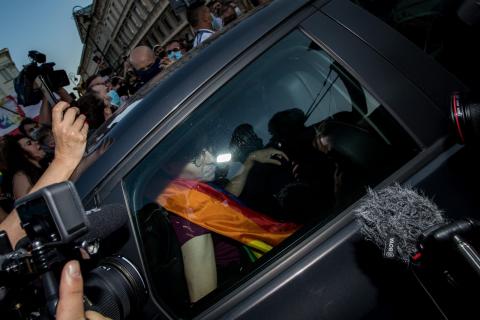 Under the hot Saturday midday sun, flanked by a few friends, Ewa Tomaszewicz is pacing around on a patch of grass outside the police station on Jagiellonska street in Warsaw's Prague district, taking phone calls and trying to figure out what is happening with her partner, Gosia R, who has been detained inside the building since Friday night.

The last time Ewa heard directly from Gosia was around 10pm that night as she was being driven to the police station in the police van after which she had her phone confiscated. "She was brave, as always, even if, of course, scared," Ewa tells BIRN. Since then, the only contact she has had is via Gosia's lawyer, who has been allowed inside the station.

Gosia is one of over 48 people detained by the Warsaw police on Friday night while taking part in a solidarity action with LGBT activist Margot S., who was put on temporary arrest for two months on charges of vandalising a van belonging to a pro-right to life foundation with homophobic slogans and attacking its driver in June.

Late Friday afternoon, people gathered outside the headquarters of the NGO 'Campaign against Homophobia' in central Warsaw to accompany Margot during her imminent arrest. Margot is being pursued on two separate charges, one related to allegedly vandalising the van in June and another for insulting religious feelings and monuments by hanging rainbow flags on various Warsaw statues in July. The two-month temporary arrest sentence, which is final, is for the first charge; she is facing a maximum five years in prison if eventually convicted.

While Margot did come out of the Campaign against Homophobia HQ with her hands out and repeatedly offered to be handcuffed, the police initially avoided detaining her. Seeing this, together with her...