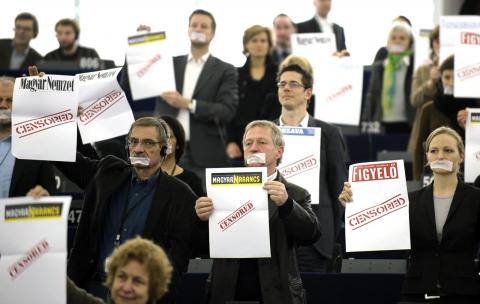 Karpati provided no further details of any 'new' Index, but Veronika Munk, deputy editor-in-chief, tells BIRN that any moves to do so would be constrained for as long as the majority of the editorial staff who resigned have to work out their notice. On July 24, about 90 journalists of Index resigned following the sacking of Dull, who had warned on June 22 in a piece published on the site that the editorial staff were "in danger" and the dial on a "freedom barometer" on the homepage had been moved to "in danger". The resignations made international headlines and thousands of people took to the streets of Budapest to demand a free press and a "new Index".

"Some 30 of our staff have been exempted from work, but the rest of us have to continue until the end of the month. Legally speaking, during our notice periods we cannot frame new projects," Munk tells BIRN.

In many ways setting up a new independent news venture is a race against time. The longer it takes to establish a new brand and launch the site, the more the public uproar dies down and the potential support wanes. "I do hope we can stay together, but I admit the future is uncertain. One thing is clear: Hungarian society does not need another small media outlet, but a news site offering a wide spectrum of information," Munk says.

Demonstrators protest against the dismissal of the editor-in-chief of Hungarian news website Index.hu, in the streets of Budapest on July 24, 2020. EPA-EFE/ZSOLT SZIGETVARY

Navigating the murky waters of censorship

Index has been a flagship of critical journalism in Hungary since its establishment in 2000. In an increasingly challenging media environment - Hungary is ranked 89th out of 180 countries on the Reporters without Borders...