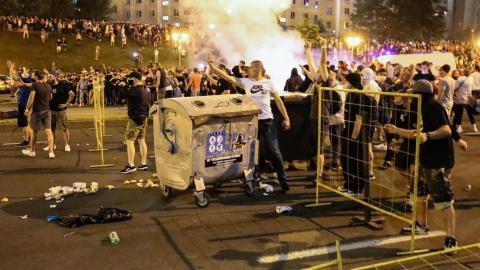 Belarusians living in Warsaw are organising a solidarity demonstration with protesters back home for Monday evening, with thousands expected to join the event starting at 7pm CET near the Copernic monument on Krakowskie Przedmiescie in the centre of the capital. Similar events are planned in other Polish cities, including Krakow and Lodz.

The demonstrations come as Poland and other Central European nations lined up to criticise the Belarusian authorities for conducting what they consider a flawed presidential election and then using violence against people protesting the vote, which left at least one dead, dozens injured and more than 3,000 detained.

The Belarusian Central Election Commission chief Lidia Yermoshina announced on Monday that the long-serving Alexander Lukashenko - Europe's last dictator, as he's often referred to - had won 80 per cent of the vote according to preliminary results, handing him a sixth term in office. The main opposition challenger Svetlana Tikhanovskaya, a former teacher who managed to become the face of the opposition during the campaign, won 9.9 per cent, while three other candidates each won less than 2 per cent.

Tikhanovskaya rejected the official results that gave Lukashenko his landslide victory and her team has vowed to stay in the country to campaign for a change of power. "I will believe my own eyes - the majority was for us," Svetlana Tikhanovskaya told reporters in the capital, Minsk, on Monday.

Central European leaders lined up to condemn the poll.

"The intervention of the Belarusian regime against the political opponents and citizens calmly expressing their views is not acceptable. We call upon president Alexander Lukashenko to uphold the basic principles of democracy and freedom of...