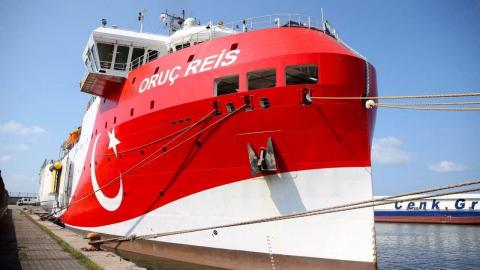 Tension in the Eastern Mediterranean between Greece and Turkey has escalated again after a short period of time of tranquillity, as Athens declared a counter-NAVTEX to Turkey's initial navigational telex, or NAVTEX, announced earlier on Monday.

The Greek Foreign Ministry called on Turkey to stop what it called "illegal actions" in the East Med around the island of Kastellorizo, which is only a mile from the Turkish coast.

"Greece will not accept any blackmail. It will defend its sovereign rights," the ministry said, questioning Ankara's declared readiness to continue talks.

Ankara was angered by a maritime deal signed last week by Greece and Egypt on sharing the maritime zones and energy riches of the East Med.

The Turkish Foreign Ministry in a written statement on Friday deemed the agreement "null and void".

Following this, Ankara declared a new NAVTEX - essentially an announcement or warning of imminent maritime activity or exploration - and deployed a drilling ship, Oruc Reis, with a large navy presence.

Turkish media have reported that the entire Turkish navy is now deployed in the region amid risks that the tension could turn into a military conflict.

"Our work in the Mediterranean and Black Seas will continue perpetually for Turkey's energy independence. 83 million [Turks] are behind you, Oruc Reis," Fatih Donmez, the Turkish Energy Minister, said on Monday.

Turkey and Greece have long disagreed on their continental shelf and maritime zones. But gas discoveries and explorations in the East Med have deepened the rift and drawn in regional and international actors.

French President Emmanuel Macron has called on the EU to sanction Turkey, citing Ankara's growing assertiveness in the East...