Huge crowd in front of the "Torlak" Institute, queues from 4.30 am this morning PHOTO 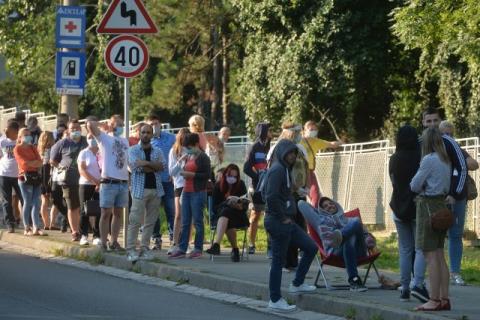 As early as around 4.30, the most persistent arrived to take their seats, in order to be among the first when the doors of the laboratory open at eight o'clock.
Citizens from all parts of Serbia are waiting in the queue, but there are also those who arrived from Macedonia, Republika Srpska. The reason for that lies in the fact that there is no possibility to schedule testing in Torlak, and the results are obtained on the same day.
Slobodan Bugarski from Belgrade, who is traveling to Moscow tonight, was among the first to arrive in front of Torlak this morning at around 4.30. He says that he knew that there were big crowds, but that he chose this institution because there are no appointments and the results arrive on the same day.
He did a PCR test on Saturday, but he did not calculate well, so by the time he arrives in Moscow, the test will be older than 72 hours, so he started repeating the test early this morning. He paid 6.000 dinars for the second time, and stood in line again.
Milorad Paji and two other friends left Svilajnac for Belgrade last night due to testing. They travel to Austria and need a negative PCR test or to be quarantined for 10 days.
"We are waiting in line from half past four. We chose ''Torlak '' because there are no appointments here and the results are obtained on the same day, which suits us because of the trip. If we decide to travel without a test to Austria, we would have to spend 10 days in quarantine or to pay for testing, which costs from 140 to 190 euros there", Pajic told Tanjug.
Miljan Bodzic will travel to the United Arab Emirates on Wednesday. He says that he knew that there were huge crowds in "Torlak", but that the results were obtained the fastest, and that is why he decided to perform...