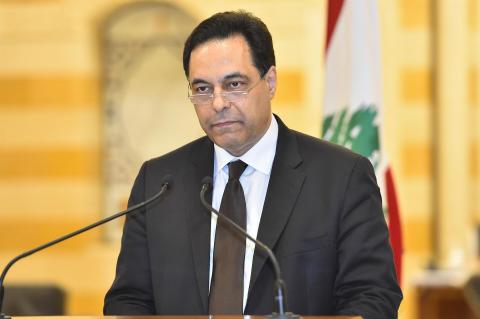 Lebanon's prime minister stepped down from his job on Aug. 10 in the wake of the disastrous Beirut port explosion that triggered public fury, saying he has come to the conclusion that corruption in Lebanon is "bigger than the state.''

In a brief televised speech after three of his ministers resigned, Prime Minister Hassan Diab said that he is taking "a step back'' so he can stand with the people "and fight the battle for change alongside them.''

"I declare today the resignation of this government. May God protect Lebanon,'' he said, repeating the last phrase three times.

The move risks opening the way to dragged-out negotiations over a new Cabinet amid urgent calls for reform. It follows a weekend of anti-government protests in the wake of the Aug. 4 explosion in Beirut's port that decimated the facility and caused widespread destruction, killing at least 160 people and injured about 6,000 others.

The moment typified Lebanon's political dilemma. Since October, there have been mass demonstrations demanding the departure of the entire sectarian-based leadership over entrenched corruption, incompetence and mismanagement.

But the ruling oligarchy has held onto power for so long, since the end of the civil war in 1990, that it is difficult to find a credible political figure not tainted by connections to them.

Diab blamed corrupt politicians who preceded him for the "earthquake'' that has hit Lebanon.

"They (political class) should have been ashamed of themselves because their corruption is what has led to this disaster that had been hidden for seven years,'' he added.

"I have discovered that corruption is bigger than the state and that the state is paralyzed by this (ruling) clique and cannot confront if or get...