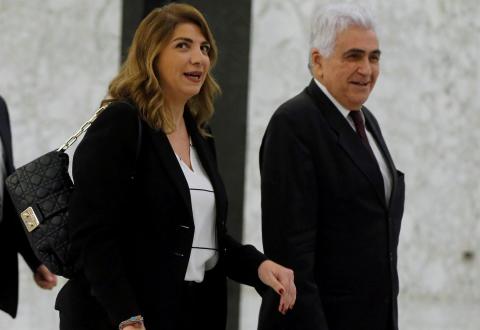 A Lebanese judge on Aug 10. began questioning the heads of the country's security agencies over last week's devastating blast in Beirut as another Cabinet minister resigned in protest.

Judge Ghassan El Khoury began questioning Maj. Gen. Tony Saliba, the head of State Security, according to state-run National News Agency. It gave no further details, but other generals are scheduled to be questioned.

Justice Minister Marie-Claude Najm, who was sprayed with water and verbally attacked last week while visiting a damaged area, meanwhile handed her resignation to the prime minister on Monday, the news agency said. She is the third Cabinet minister to resign over the blast.

A Cabinet meeting is scheduled for Aug. 10 amid speculation the government could resign en masse. If a total of seven out of the 20 ministers resign, the Cabinet would effectively become a caretaker government. At least nine members of parliament have resigned.

The Aug. 4, blast killed 160 people and wounded about 6,000, in addition to destroying the country's main port and damaging large parts of the capital. Losses from the blast are estimated to be between $10 billion to $15 billion, and nearly 300,000 people were left homeless in the immediate aftermath.

The explosion is believed to have been caused by a fire that ignited a stockpile of explosive material that had been stored at the port since 2013. The disaster has been widely blamed on years of corruption and neglect by the entrenched political leadership that has governed Lebanon since its 1975-1990 civil war.