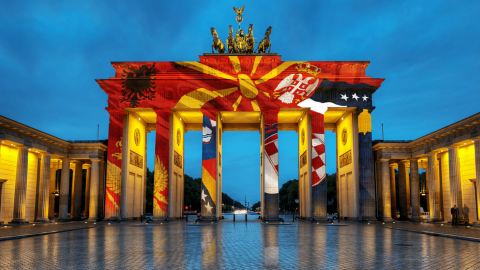 In her interview for BIRN, the experienced diplomat, who served in Israel, Ukraine, Russia and Albania before becoming the Western Balkans Director in Berlin, said Germany hopes to continue accession talks with Serbia and Montenegro, further implement EU priorities for Bosnia and Herzegovina and resume the stalled Kosovo-Serbia dialogue.

"Thanks to the facilitation efforts by EU Special Representative Miroslav Lajcak, and the support of Germany and France, the EU-led dialogue [between Belgrade and Pristina] finally resumed on July 12, after its interruption 20 months ago," she recalled.

"We see an urgent need for progress in the dialogue as the unresolved situation is holding both countries back and hampering much needed regional cooperation in the entire Western Balkans," she added.

"A comprehensive agreement that allows for the realization of the EU perspective is in the interest of both Kosovo and Serbia, as well as the region as a whole. This agreement should also bring greater stability to the region. As is well known, we do not believe that new borders or land swaps would contribute to such a sustainable solution," Schutz explained, referencing Germany's known opposition to territorial exchanges as part of a final settlement.

Berlin, often seen in the region as the key decision maker when it comes to the EU aspirations of the so called "Western Balkans Six", also plans to focus in the months ahead on demographics and migration.

In the search for better employment, nationals from the Balkans are heading to Germany increasingly every year. The latest data from the German statistical office says that last year 237,755 Serbian nationals, 232...