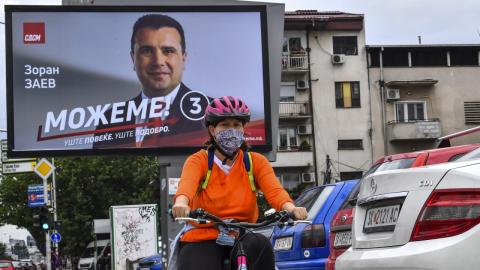 The former partners in the last coalition government in North Macedonia, the Social Democrats, SDSM, of Zoran Zaev, and the Democratic Union for Integration, DUI, led by Ali Ahmeti, are engaged in substantial talks on a new government, amid speculation that talks might be stuck over the DUI's insistence on an ethnic Albanian prime minister.

Both parties have hinted at differences but have avoided answering whether this remains the main stumbling block.

"The talks and consultations on a parliamentary majority and a coalition that can carry out a full four-year government mandate are ongoing," the Social Democrat spokesperson Kostadin Kostadinov said on Tuesday. He added that, "in the interest of the talks, at this moment we cannot reveal any details".

He repeated that the party was convinced that as Zaev heads the party that won most seats in the elections - 46 - he will be appointed prime minister-designate by the president by the end of this week, as deadlines prescribe.

After meeting Zaev, DUI head Ahmeti on Monday came out only with a vague statement that, "we are equally close and far from forming a new government". He also did not reveal details. "We are investing in things going in a good direction… I hope that all parties will have a strong political will so that we overcome the differences and hardships," he added.

Speculation that the talks are stuck over the DUI's demand for an Albanian PM were fuelled by the head of the small Democratic Alliance party, Pavle Trajanov, part of Zaev's election alliance, called "We Can". "The DUI had a good campaign with the phrase 'Albanian PM', and they are insisting on that at any cost," Trajanov told Kanal 5 TV this week.

In the elections, the DUI kept its place as the largest ethnic...