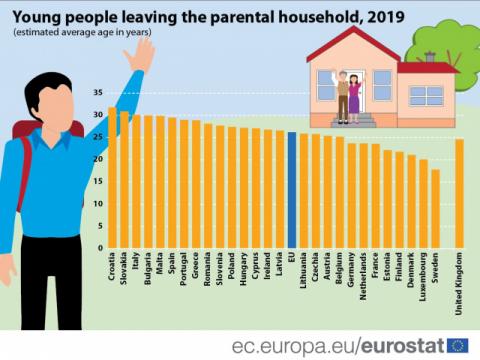 In Bulgaria, the share of young people living with their parents is 48.8 percent last year, according to data released today by the statistical service Eurostat.

Leaving home often depends on whether young people are in a relationship or study, as well as on the level of their financial (in) dependence, the labor market, rental prices, but also on cultural characteristics.

On average in the European Union, young people leave the family home at the age of 26.2, according to data for 2019.

But this age varies considerably from country to country. The youngest leave home Swedes (17.8 years), Danes (21.1 years) and Finns (21.8 years).

Croats (31.8 years) and Slovaks (30.9 years) stay with their parents the longest, followed by Italians (30.1 years) and Bulgarians, who are exported on average at the age of 30.

Men stay longer in their parents' homes than women in almost all member states. The only exception is Luxembourg./Nova TV

US Secretary of State Mike Pompeo Cancels Trip to Europe