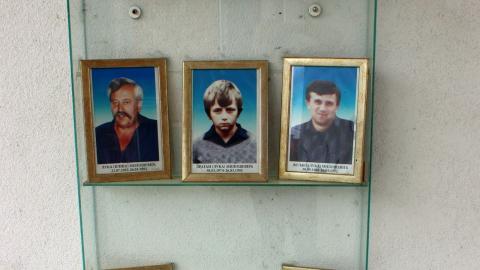 On that same day in Traktorska Street in Sijekovac, a village near the northern Bosnian town of Bosanski Brod, where Milosevic still lives, soldiers and members of paramilitary groups, some of which consisted of locals Croats and Bosniaks, killed his father Luka and two brothers, Zeljko and Dragan, who was 17. Zeljko's body has never been found.

"Members of a Croat-Muslim group, with the participation of military formations from Croatia, one of which numerous witnesses have identified as the HOS [Croatian Defence Forces]" attempted to take control over the ethnically-mixed village, according to a verdict handed down by the Bosnian state court that convicted a fighter called Zemir Kovacevic.

Kovacevic, a member of an armed group which later became the Interventions Squad of the Croatian Defence Council's 101st Bosanski Brod Brigade, was jailed for ten years for participating in the murders, mistreatment and looting of Serb civilians in Sijekovac.

According to allegations made by the Centre for the Investigation of War Crimes in Bosnia's Serb-dominated Republika Srpska entity, the attack on Sijekovac was conducted by regular Croatian Army forces, Croatian National Guard members and Croatian Defence Forces paramilitaries.

The Centre for the Investigation of War Crimes claims that, following the first attack on Sijekovac, in which nine civilians died, at least 11 more Serb residents were killed in a subsequent attack.

The Bosnian state court found that the initial attack on Sijekovac was preceded by a meeting of the local crisis committee, the wartime authority in the village, at which Serbs were ordered to hand over their weapons.

After that, large groups of uniformed people began gathering and Serbs were urged via megaphones to...