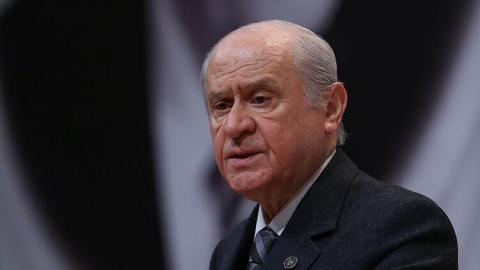 Nationalist Movement Party (MHP) leader Devlet Bahçeli expressed suspicion over the timing of a blast that razed parts of Beirut to the ground last week.

"The Beirut blast is quite thought-provoking and striking, which came at a time when rising tensions in the eastern Mediterranean are at the center of our country's and international political agenda," he said in a statement on Aug. 12.

The explosion came at a time when Lebanon was already in trouble, he said, stressing that the country was facing protests despite the tragic incident "as if one is pushing on a button."

Every problem in Lebanon has the potential to affect Syria, Iran, Iraq, Jordan, Israel, Cyprus and Turkey, and even has the capacity to influence the world, Bahçeli stated.

The MHP leader suggested that "some circles who are aiming to disconnect Turkey from Syria, Libya and the eastern Mediterranean," also wanted to "break the bond between Beirut and Ankara," but the visiting Turkish officials to Beirut "did not let that happen."

A fire at a warehouse at the Port of Beirut led to an enormous blast, causing massive property damage in several neighborhoods of the capital.

According to Lebanon's Health Ministry, at least 171 people have died and over 6,000 have been injured since the explosion on Aug. 4 that ravaged parts of the Lebanese capital.

Bahçeli also criticized critics who claimed that the foreign currency reserves of the Turkish Central Bank have melted.

A case for Turkey, a key country in Europe and beyond: Op-ed