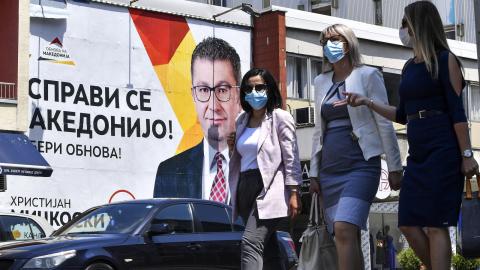 Zaev acted swiftly on his promise to sort out the decades-long dispute with Greece over the country's name, which had resulted in Athens blocking Skopje's bids to join the European Union and NATO.

In 2018, a historic compromise was reached with Athens so that the country would add the word "North" to its name. The deal was praised by the West, prompting promises of imminent NATO membership and the quick opening of EU accession talks.

By 2019, when the term "North Macedonia" was formally introduced in the constitution, former PM Gruevski had fled to Hungary, an amnesty had been issued to dozens of those involved in the mob attack on parliament, and the Special Prosecution office, set up to handle crime and corruption stemming from the wiretaps, had became increasingly politicized. High-profile trials dragged on while convicted officials, such as former police minister Gordana Jankulovska, were given delayed sentences, casting doubt on the promise of unselective justice.

However, two big victories seemed in the bag: NATO kept its promise to launch procedures to complete North Macedonia's entry as the Alliance's 30th member. The other - a far more important process for most people at home - was the opening of EU accession talks. With Greek objections now out of the way and pledges from top European officials, it seemed a done deal that Brussels would set a date for the start of talks.

While North Macedonian officials did not refrain from speculating about early dates for such talks, EU reality dictated a different course. On the preference of some of its member states, North Macedonia's case was now tied to that of Albania. The weaknesses of one state thereby harmed the cases for both of them, regardless of the strengths of one.

Loncar: "We are worried about a new strain of coronavirus, it has arrived in Hungary"
Romanian Academy's head: Day of National Culture comes with Eminescu