Turkish swimmer aims to get medal at Para World Contest 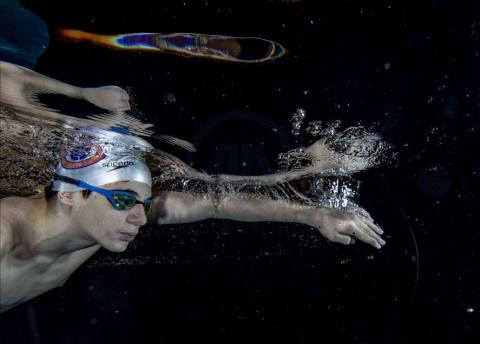 A teenager born without a right arm and left leg started swimming for rehabilitation and succeeded in becoming a national swimmer by overcoming his fear of water.
Having won 50 times already acquiring first place, he is now aiming to achieve new challenges.
Koral Berkin Kutlu, who is a 14-year-old and an athlete of the Istanbul Metropolitan Municipality Sports Club, trains six days a week, with some days doubling his performance to reach his goal.
"Some days, I train twice. So far, I have won 100 medals, 50 of which are for holding the first position," he said.
The young swimmer stresses that he tries to motivate himself in the best way while preparing for the competitions. "I am currently preparing for the Paralympic Games, expected to be held in 2021. I want to add new ones to my achievements in these competitions," he said.
Highlighting that swimming transforms people into athletes and brings them to good places, Kutlu noted that he recommends swimming to everyone.
Mehmet Fatih Kurt from the Istanbul Municipality Sports Club said that although Kutlu is young, he is quite experienced.
"Kutlu is an athlete who put his effort to strive every day and whose performance develops rapidly. He became known around the world and achieved success at a young age," Kurt said.
"We are currently preparing for the world championship in 2021," he added.

Intact mask of Greek god Dionysus found in Turkey
Volkswagen packing up in Turkey, causing Erdogan to ‘lose’ his mind