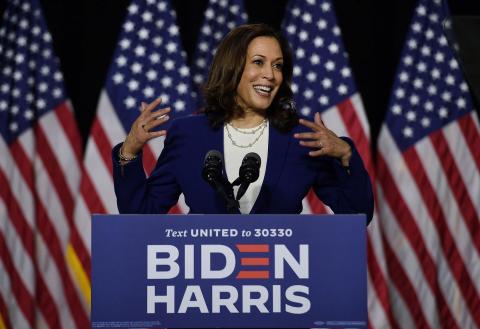 Joe Biden and Kamala Harris launched their joint White House bid on Aug. 12, with the newly-minted vice presidential nominee saying Americans are "crying out for leadership" to overcome the triple crisis of a pandemic, racial injustice and a ravaged economy.

Making their first appearance as running mates, before a small crowd of reporters and staffers at a Delaware high school closed to the public due to coronavirus concerns, the Democratic duo vowed to end Donald Trump's presidency and, in Biden's words, "rebuild this country."

"Everything we care about," said Harris. "It's all on the line."

A formidable 55-year-old U.S. senator from California and a daughter of immigrants, Harris has already made history as the first woman of color tapped for a major party presidential ticket.

Describing a country at the crossroads, she left little doubt of her determination to go on the attack, saying Trump "just isn't up for the job" and has left the nation "in tatters."

"America is crying out for leadership, yet we have a president who cares more about himself than the people who elected him," said Harris.

Despite the awkwardly intimate setting, a far cry from the typical campaign rollout featuring an audience of thousands, Harris appeared telegenic and confident in her first speech as vice presidential nominee - for which she and Biden both arrived wearing facemasks.

"The case against Donald Trump and Mike Pence is open and shut," said the former California attorney general as she assailed the president's "failures of leadership" on containing the deadly pandemic and an economy hobbled by measures to fight the contagion.

The daughter of Indian and Jamaican immigrants to the United States...