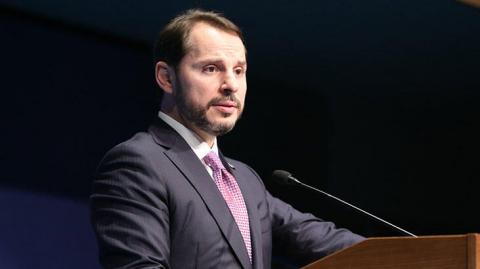 Turkey is affected by global capital movements as much as other countries, the finance minister said on Aug. 12, referring to the Turkish lira losing ground.

"Turkey is affected much less than before from exchange rate volatilities," Berat Albayrak told CNN Turk.

Albayrak stressed Turkey is managing fluctuations in a controlled manner.

Turkish lira lost around 22% of its value against the US dollar since the beginning of this year. The dollar/lira exchange rate hit an all-time high of around 7.37 last Thursday.

"What matters is not the level of the exchange rate, but whether it is competitive," Albayrak said.

He added that malicious perception operations do not work on Turkey anymore as the country switched to a "national independence (economy) model".

Pointing to the rapid revival of the economy in May and June, Albayrak said Turkey will be among the least hit countries in the second quarter of this year due to the coronavirus pandemic.

"We will be one of the fastest normalized and recovered countries in the world," he said.

All economic data shows Turkey's economic recovery is off to a strong start with the lifting of restrictions.

"On contrary to international institutions' forecasts which show a contraction of above 5%, we expect Turkish economy to grow between minus 2% and plus 1% this year, above the world average," Albayrak said.