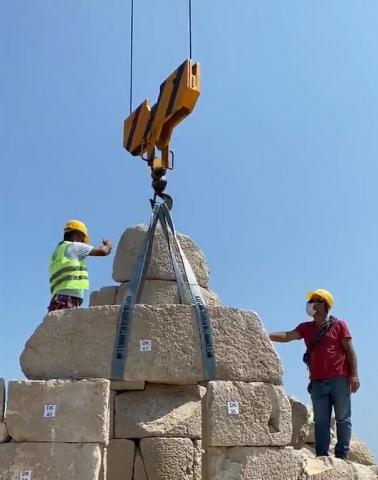 The restoration of Patara Neron Lighthouse, which was commissioned by the Roman Emperor Neron in AD 54 as a "prestige project" in the ancient city of Patara, began on Aug. 11.

"The removal of tower blocks for Patara Lighthouse has started. These blocks, which will carry the heaviest load, will go to the stone hospital established on the site for conservation," said Professor Havva İşkan Işık, the head of the project, announcing the first step for the excavation.

The lighthouse, located in the resort province of Antalya's Kaş district, will return to its original state after 1,968 years on completion of its restoration process.

The lighthouse structure is the only example among the ancient lighthouses found on Earth with all its parts and was built with double-walled irregular stone mesh and filled with mortared rubble stone, according to experts.

Nearly 2,600 original stones belonging to the lighthouse will be classified, and the inner and outer walls of the stones will be organized in a "stone hospital" planned to be built in the area.

As it is understood from the traces of the steps discovered that the main entrance is from the north facade of the podium, it is believed that the structure collapsed as a result of a strong earthquake in the sea and the tsunami waves that followed.

The ancient city of Patara, having existed in the eighth century, is one of the oldest settlements of the Lycian Union and also is its capital city.

In the ancient city, which is believed to cover an area of 10 square kilometers, excavations and restoration works have been conducted for many years under the direction of Işık.

A science committee will be created to monitor the...