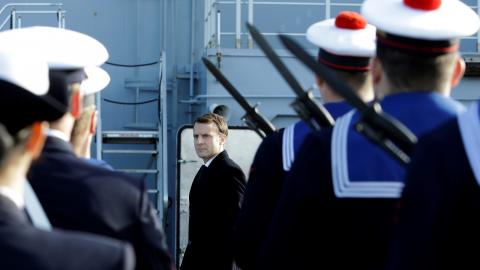 French President Emmanuel Macron reviews an honor guard on the deck of the assault ship Dixmude docked in the French Navy base of Toulon, 19 January 2018. Photo: EPA-EFE/Claude Paris / POOL MAXPPP OUT

"I have decided to strengthen the French military presence temporarily in the Mediterranean, in co-operation with Greece and other European partners," he said.

The Greek General Staff Headquarters confirmed that Greek and French had ships started a joint military exercise near the island of Crete.

Mitsotakis called Macron a "true friend of Greece and also a fervent protector of European values and international law". The French President in turn showed his support for Greece by tweeting in Greek.

Turkey meanwhile continued to lay the blame on both Greece and France.

"We see that Greece is taking wrong steps because of provocation by a country that does not have any coastline in East Med," Turkish President Recep Tayyip Erdogan said on Thursday, clearly referencing France.

Turkey and Greece have long disagreed on their continental shelf and maritime zones. But gas discoveries and explorations in the East Med have deepened the rift and drawn in regional and international actors.

An earlier bout of tension was eased by Germany last month,...