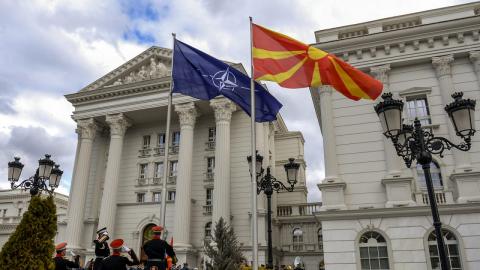 Due to the COVID-19 pandemic, North Macedonia this year decided against holding a traditional banquet to commemorate the anniversary of the signing of the historic 2001 Ohrid Peace Accord which ended a short-lived conflict that year by granting more rights to the country's ethnic Albanians.

The anniversary was only marked by a video address by North Macedonia's Vice Prime Minister Sadulla Duraki, who is also in charge of relations between the country's ethnic communities.

Duraki said that over the past year, North Macedonia became a member of NATO, which meant that "the main goal of the [Ohrid] accord has been achieved - stopping the 2001 conflict and creating permanent security in our country".

The Ohrid accord ended an armed conflict between ethnic Albanian insurgents and North Macedonia's security forces.

The deal was signed by Macedonia's then president, Boris Trajkovski, and the four main parties at that time: the Social Democrats, VMRO-DPMNE, the Democratic Party of Albanians and the Party for Democratic Prosperity.

The NLA was later transformed into the Democratic Union for Integration, DUI, which to this day remains the biggest ethnic Albanian party in the country and is now part of the government.

Under the accord, the country kept its unitarian character, as opposed to becoming federal, but the constitution was changed and positive discrimination towards the ethnic Albanian population was introduced in public service, the military and police.

Wider use of the Albanian flag and language was also allowed, alongside other measures.

Nineteen years on, despite delays and political...