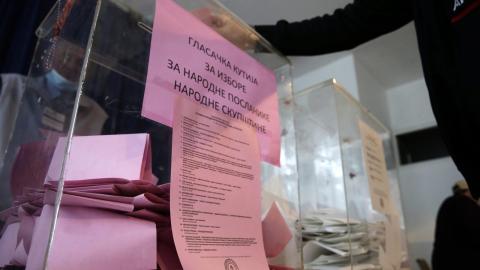 The government and the opposition accuse each other, moving the political struggle from institutions to the individual level.

Thus, politics is reduced to personal confrontations between politicians, instead of discussions about ideas and political programmes. In such clashes, the citizens who do not see a political option that can articulate their dissatisfaction are most at a loss.

Although the international community has the impression that Serbia is politically stable, having in mind the support for President Aleksandar Vucic's governing Progressive Party, the situation is in fact extremely fragile.

Political stability exists only superficially. It is unsustainable in the long run, in an atmosphere of constant tensions and verbal, and even physical, conflicts.

In the last few months have we have seen how easily verbal and physical confrontations between citizens can occur between those who support the government and those who are against it.

Recently, there was a physical confrontation in front of the National Assembly when a Vucic sympathizer hit a female member of the opposition Democratic Party.

Such spontaneous cases of conflict are dangerous because they show that the ruling party cannot always control the actions of its own supporters. Such situations are a consequence of the atmosphere that has been created - for which the government bears the greatest responsibility.

At one point, the government will not be able to control its supporters, who are told almost daily on the front pages of the tabloids that opposition leaders want to kill the President and provoke riots and a coup.

Then, when the supporters of the government and the opposition find themselves opposite each other, the accumulated...