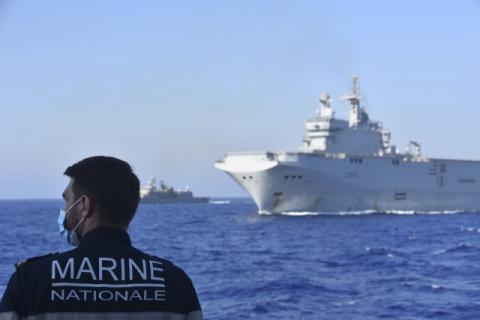 The eyes of the whole world are focused there because of the new, dangerous tensions between Athens and Ankara, RTS writes, referring to the Greek media.
Athens is demanding the deployment of American forces.
The close meetings of Turkish and Greek frigates, which have aroused passions in the eastern Mediterranean in the last 24 hours, have been replaced by the inflammatory rhetoric of Ankara officials, so Finance Minister Berat Albayrak said it was time for the new generation to pay the price of independence.
"Our leader did not give up. It is our duty. If they attack us, we will fight back. We will fight to the end," Albayrak said, daily Hurriyet reports.
The Turkish minister's statement followed a series of similar words by President Recep Tayyip Erdogan, who warned Greece that the fleet accompanying the research ship "Oru Reis" would retaliate against any provocation by Greek ships.
Although the media in Greece and Turkey report a significantly growing number of fighter jets in the zone where several hundred incidents have been registered over the past year, it seems that the two fleets, after a close encounter between frigates, are still enough far away to avoid any future problems.
According to the Marintrafik website, which monitors maritime traffic, the Turkish flotilla and "Oru Reis" were about halfway between Crete and Cyprus on Friday afternoon, with occasional confusing maneuvers.
Greece's "Ta nea" states that "Oru Reis" changed course by 180 degrees, and that the next destination of the Turkish flotilla is not known now.
"Oru Reis" changed course only 24 hours after the collision of the Greek and Turkish frigates during, apparently, clumsy maneuvering, which later led to serious accusations by the two...