Bosnia’s LGBT Activists Vow to Fight on Despite Cancelled March 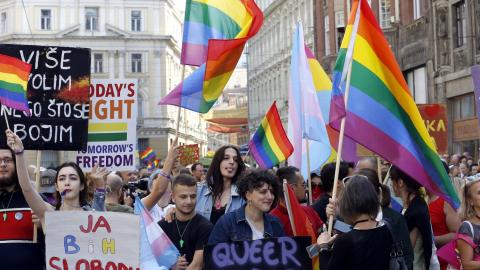 Bosnian Pride organisers have cancelled this year's planned march in the capital, Sarajevo, because of the coronavirus outbreak - but have vowed to redouble efforts to make up for this with other activities designed to draw attention to community problems that the pandemic has only exacerbated.

Preparations for the march, scheduled for August 23 under the slogan "Life is not four walls", had shown them that the community not only faced new health-related and epidemiological obstacles, but also older problems, including institutional resistance, discrimination, unequal treatment and homophobia.

The Sarajevo Canton government had given its support for this year's march, however, with technocrat Prime Minister Mario Nenadic saying they wanted to improve the human rights of all citizens.

But the Pride organizers said they still faced additional hurdles such as strict security measures that are not usually imposed on other "high-risk" gatherings.

The organisers had planned to stage a march respecting current public gathering restrictions, including the ban on more than 100 people attending any outdoor events.

Last year, some 3,000 activists, supporters and allies from Bosnia and the region walked through the centre of Sarajevo under heavy security in September, at the first such event ever held in Bosnia.

Sarajevo has now become a regional hotspot for COVID-19 after a spike in infections in the last two months, with dozens, sometimes up to a hundred, new cases reported daily.

The health situation has forced the Sarajevo Film Festival, the capital's annual cultural highlight, to switch to a full online format for this year's edition, starting August 14.

"It is symptomatic that under the excuse of security or pandemic...