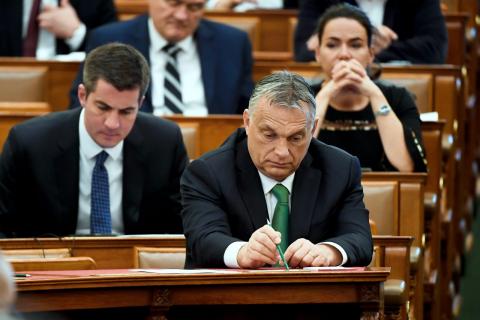 The presidents of the opposition parties - including the liberal Democratic Coalition, the Socialists, the young emerging Momentum, the leftist-liberal Dialogue, the greenish LMP and the former radical rightist Jobbik - have agreed to nominate only one candidate in each of the 106 individual constituencies. According to Hungarian electoral law, 106 of the 199 MPs are elected directly, while 93 are delegated from party lists. It is the individual constituencies that have been key to Fidesz's landslide victories since 2010.

If the opposition parties do manage to defeat Fidesz in 2022, they would govern together on the basis of a previously agreed programme and principles, the statement laid out. The parties said they would work out the details later, but Lakner pointed out it might not be as big a challenge as it first appears, as the 2018 election programmes of most of the opposition parties were little different.

The newfound coalition will soon face its first test: on October 11, an early election will be held in a rural constituency in north-east Hungary, where Fidesz unexpectedly lost its MP because of a motorbike accident during the summer. The stakes are high: if the opposition manages to win this seat, Fidesz would be stripped of its two-thirds majority in the parliament. The joint candidate this time comes from the former radical party Jobbik, which used to be strong in the countryside due to its law-and-order program.

Looking at last year's municipal elections gives a taste of what might be possible if the opposition can...