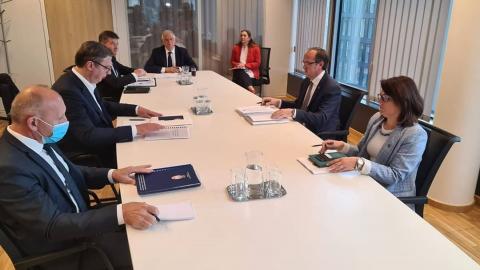 The US special envoy to the stalled Kosovo-Serbia dialogue, Richard Grenell, said on Twitter on Friday that a meeting between Kosovo and Serbia would take place in Washington on September 2.

"We are happy to announce that the leaders of Kosovo and Serbia will meet at the White House for a negotiation on September 2″, Grenell tweeted without providing further details.

The announcement came after the Kosovo coordinator for the dialogue, Skender Hyseni, visited Washington in early August, drawing criticism for spending taxpayers' money on the trip only to speak with Grenell on the phone. Hyseni claimed he had received promises of "full support" from Grenell, but a CNN report about the new US ambassador to Germany, and his hostile views to Kosovo, overshadowed such claims.

Both Avdullah Hoti and Aleksandar Vucic have confirmed their attendance. Kosovo Prime Minister Hoti wrote on Facebook that Kosovo and Serbia would meet in Washington "as two independent countries". According to him, the meeting will focus on "major economic cooperation projects that will change the economic perspective of Kosovo and the region" - implying that Grenell's plan to divide the dialogue into two phases, political and economic, is back on the table.

"Serbia is not in a position to reject the talks. We will take part in them, and in topics focused on the economy. This is important to us, and these are good topics," he said, adding that discussion would be around free trade, rail and air lines.

In June 2020, Grenell said the dialogue would have two phases. The first, facilitated by the US,...