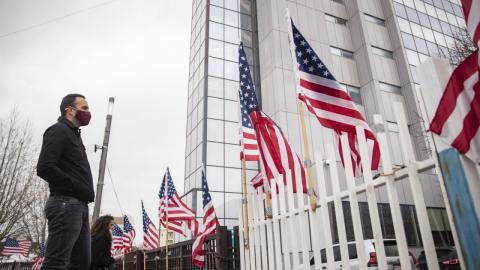 The Association of Journalists of Kosovo, AJK, said in a press release that it was concerned by news that police on Thursday detained a team a reporters from the state broadcaster RTK in Zubin Potok in the Serb-run north of the country while they were shooting.

"Such actions against journalists and media professionals on duty puts pressure on them. Detention and other forms of intimidation have recently increased and this threatens the safety of journalists, their independent reporting, and the general freedom of the media in Kosovo," the press release wrote.

The AJK said the team consisting of cameraman Mumin Jashari, Zymer Leci and Arben Jashari were prevented from shooting and taken to the police station even though they had permission from the UN KFOR peacekeeping mission and the police to shoot in Zubin Potok on Thursday,

"We were officially shooting Lake Ujman/ Gazivoda. We had permission from KFOR and the police to shoot by drone. While filming, a car first came, checked our license plates, inquired who we were and left. Then came two cars with four people. Two of them were in a uniform that read 'security', in Serbian. They photographed all the time and asked us to stop filming," cameraman Jashari was quoted as saying to AJK.

Jashari said the RTK team was then escorted to the Zubin Potok police station by "three Serbian police officers … to whom I showed the filming permit and IDs".

He said the enforced "detention lasted for about two hours until the police released us. I asked to call and inform the editorial office three times in a row, but was not allowed to do so", Jashari told the AJK.

The police spokesperson for the North Mitrovica region, Besim Hoti, told BIRN that the RTK team had not been stopped from shooting -...