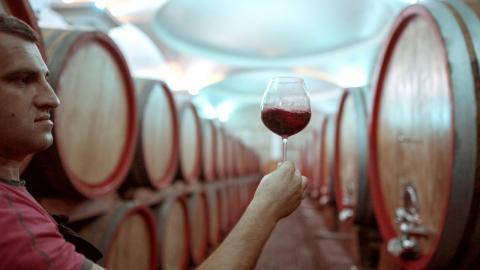 The wine industry in North Macedonia, from vineyards to grape farmers, risks collapse this year amid drastically lower demand and prices for this landmark product, the country's biggest association of wine producers, "Wines from Macedonia", warned.

Data presented by the association that unites some of the biggest wine producers and exporters say the health crisis has caused a huge drop in domestic sales of wine of a staggering 80 per cent, "mostly due to the reduced income from the hospitality and tourist sector that takes most of the consumption of bottled wine".

Since the start of the crisis in March, North Macedonia has shut down bars and restaurants as well as hotels. Although they are now partially reopened under strict safety measures, the number of visitors is still far lower than it was before the crisis.

Exports of wine are also collapsing due to "attempts of the big wine producers from Italy, Spain and France to get rid of their big stocks, which has caused a drop of the wine prices in the key export markers of more than 40 per cent", the association said.

The crisis endangers the livelihoods not only of some 2,500 employees in the 74 registered wineries in North Macedonia. It also means wineries might not be able to purchase this year's grapes from some 30,000 grape producing families that supply them.

The association says the jobs of an additional 12,000 seasonal workers are also at stake, urging the government to help this sector survive with a financial injection.

"If we fail to think rationally and act fast and decisively, there is a real danger of a complete collapse of the Macedonian wine industry," they warned.

Agriculture Minister Trajan Dimkovski, during a Thursday visit to the town of Kavadarci, which...