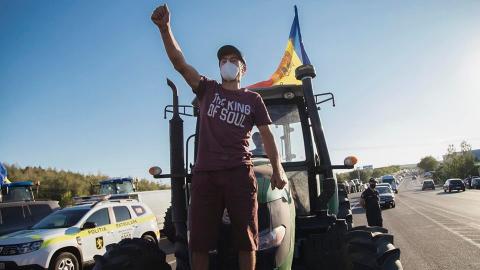 Thousands of farmers from the southern part on Moldova arrived in Chisinau to protest on Friday in front of the government building, demanding state aid after a severe drought decimated their crops this year.

One of the leaders of the protests, Ion Dringa, told IPN news agency that the government was not helping the small and medium-sized farmers who are most desperate after the drought this summer; the focus of the government was on supporting the big players in the sector.

"The government supports large agricultural holdings, which we know very well are just offshore capital. But this means a death sentence for our villages," Dringa said.

A Moldovan farmer watching the protests on the top of his tractor. Photo: Courtesy of Ecaterina Alexandr/ZdG

Prime Minister Ion Chicu accused the farmers on Thursday of blackmailing the state and of being manipulated by the political opposition. He repeated that government was willing to give farmers an award of 1,000 lei per hectare [about 50 euros], but not 3,000 or 6,000 lei [150-300 euros], as the protesters ask.

The farmers have denied any political affiliation and say they are just desperate.

A group of farmers arriving in Chisinau to ask for financial aid. Photo: Courtesy of Ecaterina Alexandr/ZdG

The government has said it is prepared to lend some money...