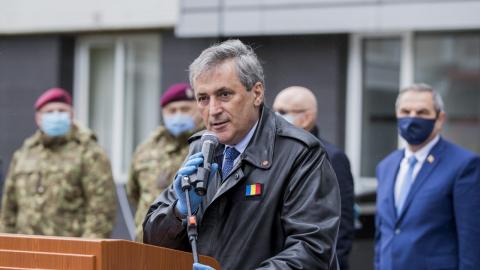 Romania's Minister of the Interior, Marcel Vela, on Friday announced the arrest and extradition to the US of an alleged human trafficking kingpin wanted by the US for eight immigration-related charges.

The accused "is at the top of a network of international human trafficking [gangs operating] in Romania, Mexico and the US," said Vela from Bucharest airport, minutes before the plane that would escort the man to justice took off.

Romanian media named the alleged criminal as a well-known Craiova underworld figure, Cristinel Luigi Popescu, known as "Luis". He was previously wanted by Romanian justice for his role in organising the illegal entry to Canada and the US via Mexico of hundreds of Romanian Roma people.

His extradition was approved by a court in Craiova, southwest Romania. Another Romanian accused of several cybercrimes in America has also been sent to the US to face justice.

The US ambassador to Romania, Adrian Zuckerman, was present at Otopeni airport and commended his Romanian counterparts for the success of the operation.

"The report recognised that the human trafficking problem in Romania was due to the backsliding in the rule of law by the prior government," the ambassador said on Friday.

He recalled having recently urged the Romanian parliament "to act and address the issue", and deemed it "very disappointing that PSD leader [Marcel] Ciolacu had responded by saying that current Romanian laws on human trafficking and the rule of law are sufficient."

"They are not," Zuckerman concluded, in his rebuttal of the opposition leader's...