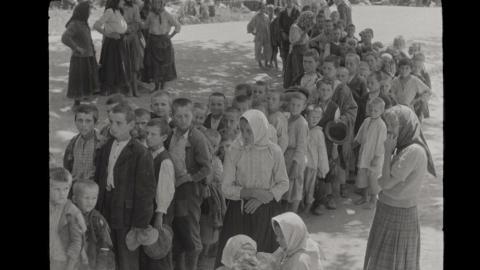 The 'Facing the Past' programme at the Sarajevo Film Festival, which opens on Friday evening and is being held online this year because of the coronavirus pandemic, is intended to honestly examine the legacy of past conflicts in the Balkans.

This year, the strand showcases a true story about people trying to do the right thing in the worst of times.

'Diana Budisavljevic's Diary' tells the story of a Croatian woman who saved children from concentration camps run by the fascist Ustasa movement in the World War II Nazi-allied Independent State of Croatia.

Diana Budisavljevic campaigned to save the lives of more than 10,000 children after discovering in the autumn of 1941 that Jewish and Serb women were being taken with their children to the camps, where they were dying of starvation and disease.

In the film, four of those children, Zivko, Milorad, Zorka and Nada, return almost 80 years later to the camps where they were detained in their childhood and only then realise that they owed their survival to Budisavljevic's courage.

"We wanted it to be an art movie, but also to serve in a way as a document of one period in time and of a concealed truth about Diana and her collaborators, about the scope of the horrors of the Independent State of Croatia, but also about all those who in those hardest of times revealed themselves as the best people," explained director Dana Budisavljevic, who is a distant relative.

"It is a movie which is inspiring for all of us who want life and coexistence, who understand how small we are in world history and that precisely because of that, we have to take care of and help each other more," she told BIRN.

This year, the organisers said, the...