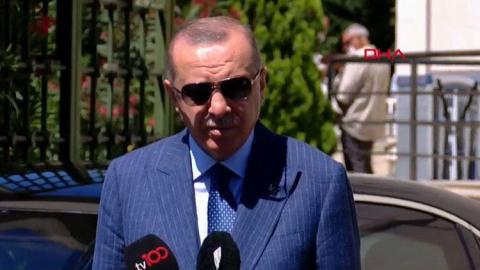 Turkish President Recep Tayyip Erdoğan said on Aug. 14 that Turkey was considering closing its embassy in Abu Dhabi and suspending diplomatic ties with the United Arab Emirates over its accord to normalize ties with Israel.

Erdoğan was speaking to reporters in Istanbul after the Turkish Foreign Ministry said history will never forgive the "hypocritical behaviour" of the UAE in agreeing such a deal.

"The UAE, which is trying to make secret calculations over the U.S. plan, which is already stillborn and has no validity, in this way ignores the will of Palestine," the Foreign Ministry said in a written statement over the deal which will lead to full normalization of diplomatic relations between the UAE and Israel.

Ankara justifies the strong and joint response by the Palestinian people and administration to the joint declaration announced by the U.S., Israel and the UAE, which envisions the full normalization of Israel-UAE relations, said the statement.

The UAE's efforts to "eliminate" the Arab Peace Plan, which was developed by the Arab League under the leadership of Saudi Arabia in 2002 and supported by the Organization of Islamic Cooperation (OIC), is "extremely worrying," said the statement.

"Nevertheless, there is no credibility to present the trilateral declaration in support of the Palestinian cause," said Ankara, stressing that history will "not forgive" the UAE for its behavior in making such a deal.

"History and the conscience of the peoples of the region will never forget and will never forgive this hypocritical behavior of the UAE, which tries to present it as a sacrifice for Palestine while betraying the Palestinian cause for its own narrow interests," read the statement.

"Of course, history will write the...