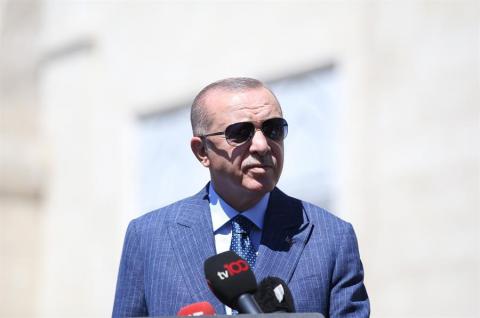 Turkish President Recep Tayyip Erdoğan said on Aug. 14 that Turkey was considering closing its embassy in Abu Dhabi and suspending diplomatic ties with the United Arab Emirates over its accord to normalize ties with Israel.

"I gave an order to the foreign minister. I said we could suspend diplomatic relations with the Abu Dhabi administration or withdraw our ambassador because we stand with the Palestinian people. We have not let Palestine be defeated, or let it be defeated," he told reporters.

"It is a country that puts pressure on some Arab countries regarding Palestine. We say clearly that it betrayed the Palestinian cause for its interests" he said on Aug. 14 speaking at a press conference in Switzerland.

Turkish Foreign Ministry said history will never forgive the "hypocritical behavior" of the UAE in agreeing such a deal.

"The UAE, which is trying to make secret calculations over the U.S. plan, which is already stillborn and has no validity, in this way ignores the will of Palestine," the Foreign Ministry said in a written statement over the deal which will lead to full normalization of diplomatic relations between the UAE and Israel.

Ankara justifies the strong and joint response by the Palestinian people and administration to the joint declaration announced by the U.S., Israel and the UAE, which envisions the full normalization of Israel-UAE relations, said the statement.

The UAE's efforts to "eliminate" the Arab Peace Plan, which was developed by the Arab League under the leadership of Saudi Arabia in 2002 and supported by the Organization of Islamic Cooperation (OIC), is ...

Prince of Liechtenstein holidaying in Bodrum