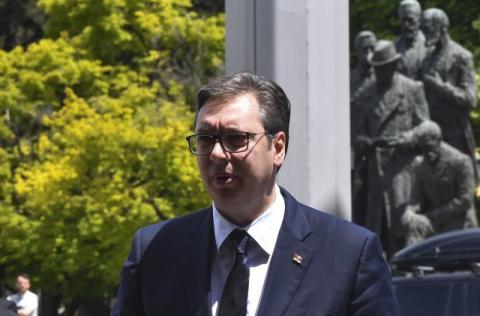 "Serbia is not in a position, but it would not be good if it was in a position to reject the talks. Why Grenell used the term 'negotiations' is a question for him. We participate in the talks, the topics are economic, it is important for us and they are good topics ", Vui says.
"The other day, they said that they support the negotiations under the auspices of the EU. But, I should not enter into their relations. We are too small to be able to afford that," Vucic said.
From the point of view of the Americans, two independent states are participating in the negotiations, Vui says, and that is how Brussels views us.
"Germany is so superior in the EU," he added.
Albanians come to the negotiations for several reasons, Vucic says.
Vui warns of the possibility of Kosovo Albanians provoking on the ground, such as today's incursion into the property of the Decani monastery.
He pointed out that Pristina's goal is not the freedom of flow of capital, goods and services, but only to reach a final solution without negotiations, and that is the recognition of independence.
Vui said that he had no doubt that there would be more provocation on their part on the ground.
He reminded that they invaded the protected zone of the Decani monastery again.
"They came there with machines to build the highway, despite the verdict of their own courts. What do they care about the monastery and the verdicts. These are things that bring extra restlessness and anxiety. We will fight against that in every place," he underlined.
Serbia wants to achieve peace by arming itself, he says.
Asked how he commented on the fact that the Albanians also procured drones like the ones in the USA, Vui said as a guest on TV Pink that they are not...