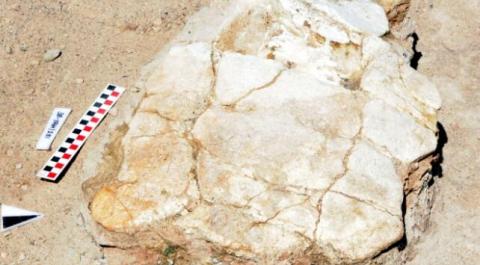 Fossils of a turtle and three teeth, thought to be of the ancestor of elephants (Proboscidea), believed to be some 7-8 million years old, have been found in the Central Anatolian province of Kayseri.

Excavation works that were initiated three years ago, along the Yamula Dam in Kocasinan district's Taşhan neighborhood, have been continuing ever since.

In the past, excavations in the region pulled out fossils belonging to creatures such as elephants, three-toed horses and rhinoceros, and now, a turtle fossil is a new edition to the list.

Fossil belonging to the turtle specie is a first of its kind discovered in the region, which will be removed from its location by the "plaster jacket" method and transferred to the Kayseri Science Center.

On the other hand, one of the fossils of three teeth, belonging to the ancestor of elephants, measures 2.80 meters long, making it the largest tooth among the three.

Earlier excavations have unearthed several fossils in the regions belonging to giraffes, four-five species of the elephant origin, rhinoceros, trio-hoofed horses and hornets.

The region in the past has also unveiled one of the largest fossils in the world, belonging to the ancestor of elephants and thought to be some 7.5 million years old, which measures two meters and 70 centimeters, an entire skull and lower jaw.

Contacts intensify in runup to summit