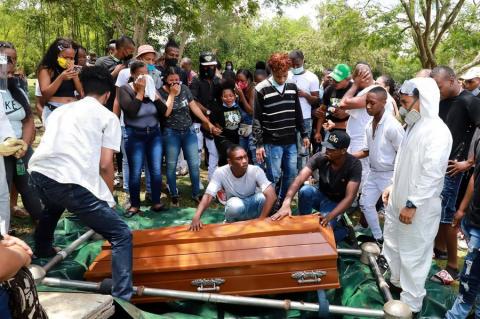 Countries among the hardest hit by the coronavirus pandemic unveiled further measures on Aug. 14 to battle rising infections, as the number of cases worldwide passed 21 million.

The U.S. Department of Homeland Security said it was extending a ban on non-essential travel through border crossings with Canada and Mexico throughout most of September "to slow the spread" of the disease.

Meanwhile, Britain added France to its list of countries hit with a mandatory two-week quarantine for returning holidaymakers from Saturday, as Paris confronts a resurgent second wave of infections.

Confirmed cases in France reached levels not seen since May on Wednesday, Thursday and Friday, at over 2,500 new cases per day.

The rising threat prompted Paris police to announce Friday that compulsory mask-wearing outside would be extended to more areas of the French capital, including the famed Louvre museum and Champs-Elysee avenue.

"If the epidemiological situation deteriorates again, mask-wearing could become compulsory throughout the capital," Paris police warned, also banning gatherings and protests of more than 10 people which do not comply with distancing measures.

Neighbouring Spain said it would close all nightclubs and ban smoking in the street where people are unable to stay at a safe distance, after the country reported almost 3,000 cases in 24 hours on Thursday.

"Personally I think it's stupid, it's over the top," Madrid-based translator Julien Garcia told AFP about the smoking ban.
In Germany, the Robert Koch Institute for disease control added all of Spain except the Canary Islands to its list of regions where incoming travelers must show a negative test for COVID-19 or quarantine for 14 days.