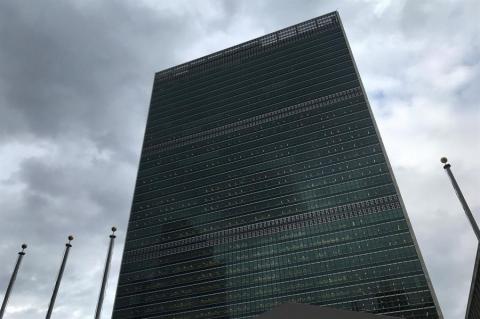 The United Nations Security Council overwhelmingly rejected a U.S. resolution to extend an Iranian arms embargo on Aug. 14, in a move with huge repercussions for the Iran nuclear deal.

Only two of the Council's 15 members voted in favor, highlighting the division between Washington and its European allies since President Donald Trump withdrew from the nuclear accord in May 2018.

Tehran mocked the Trump administration for its failure to win more than just a single vote of support, from the Dominican Republic.

"In the 75 years of United Nations history, America has never been so isolated," foreign ministry spokesman Abbas Mousavi tweeted.

"Despite all the trips, pressure and the hawking, the United States could only mobilize a small country (to vote) with them."

The result increases the likelihood that the US will try to unilaterally force a return of U.N. sanctions, which experts say threatens to plunge the Council into one of its worst-ever diplomatic crises.
"The Security Council's failure to act decisively in defense of international peace and security is inexcusable," U.S. Secretary of State Mike Pompeo said in a statement.

The embargo on conventional arms is due to expire on October 18 under the terms of a resolution that blessed the Iran nuclear deal, signed in July 2015 and officially known as the Joint Comprehensive Plan of Action (JCPOA).

Under the deal, negotiated by then U.S. president Barack Obama, Iran committed to curtailing its nuclear activities for sanctions relief and other benefits.

Since Trump pulled out and slapped unilateral sanctions on Iran under a campaign of "maximum pressure," Tehran has since taken small but escalating steps...