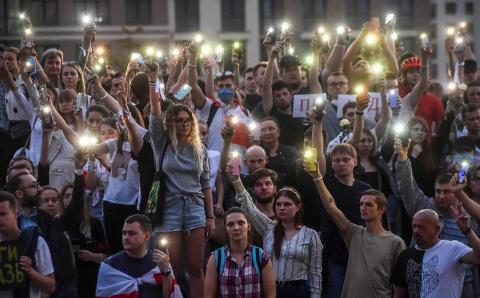 Belarusian President Alexander Lukashenko said he had secured a pledge from Russia to provide comprehensive assistance if needed to ensure the security of his country in a phone call with President Vladimir Putin on Aug. 15.

The two presidents spoke as tens of thousands of people took to the streets of Minsk once again urging Lukashenko to quit and staff at the Belarusian state broadcaster BT considered joining a wave of strikes and mass protests.    Accused of rigging Aug. 9's election, Lukashenko had earlier appealed to Putin for help as he grapples with the biggest challenge to his 26-year rule and the threat of new Western sanctions.

Ties between the two traditional allies had been under strain before the election, as Russia scaled back the subsidies that propped up Lukashenko's government. Russia sees Belarus as a strategic buffer against NATO and the EU.

The state news agency Belta cited remarks by Lukashenko that "at the first request, Russia will provide comprehensive assistance to ensure the security of Belarus in the event of external military threats".

A Kremlin statement made no mention of such assistance but said both sides expressed confidence that all problems in Belarus would be resolved soon.

Statements by both sides contained a pointed reference to a "union state" between the two countries.

The neighbours had signed an agreement in 1999 which was supposed to create a unified state. The unification project was never properly implemented and more recently Lukashenko had rejected calls by Moscow for closer economic and political ties as an assault on his country's sovereignty.