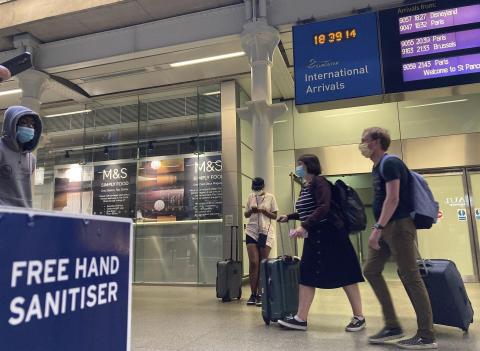 "The reopening of the Christ [monument] symbolizes the reopening of Brazil to tourism," Environment Minister Ricardo Salles said at a ceremony at the base of the statue, where visitors will have to wear masks and socially distance.

The United States is the worst-affected country with more than a quarter of the world's 21 million cases, as well as nearly 170,000 deaths. Brazil follows with 3.3 million cases and 107,000 deaths.

The UK removed France, the Netherlands, Malta and three other countries from its list of places exempt from self-isolation rules, as a second wave of virus infections threatens more disruption and economic chaos in Europe.

The move, announced late Thursday, sparked a 36-hour scramble for plane, train and ferry tickets among some Britons desperate to get back home before the 4:00 am (0300 GMT) rule change.

All arrivals from the blacklisted states after the deadline must self-quarantine for 14 days, with the measure already in place for people coming from several other countries including Spain and Belgium.