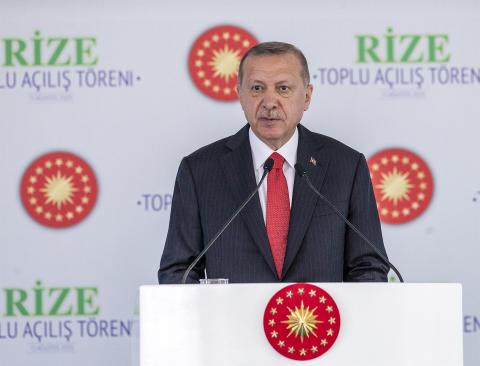 "We're conducting the most comprehensive and successful operations in history against terrorist groups," he said.

Since 2016, Turkey has launched several cross-border operations in both northern Syria and northern Iraq to eliminate the YPG/PKK terrorists there who plan attacks against Turkey and try to set up terror corridors.

In its more than 30-year terror campaign against Turkey, the PKK - listed as a terrorist organization by Turkey, the U.S. and the European Union - has been responsible for the deaths of nearly 40,000 people, including women, children, and infants. The YPG is the terrorist PKK's Syrian branch.

"We're currently focused on achieving the rights and interests of our country in every field at the most advanced level all over the world," Erdoğan said, adding that this is Turkey's real agenda.

Erdoğan underlined that the country is also striving to fight the novel coronavirus pandemic and its fallout, as well as strengthening the Turkish economy.

Turkey has become a source of hope for all oppressed regions, including Palestine, Yemen, Syria, Myanmar's Rakhine state with its oppressed Rohingya, and Libya, he said.

Turning to Greece's mistreatment of the Turkish minority in the country, Erdoğan said: "Our expectation is that Greece acts sensibly, not as...