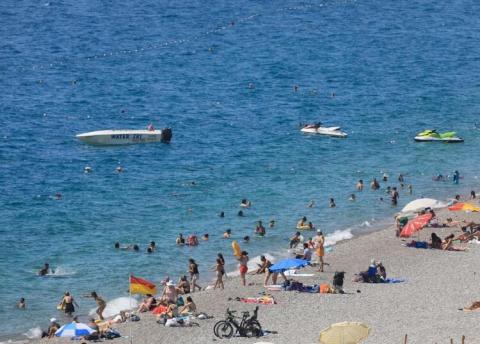 Turkey has experienced one of the hottest days of the year over the last week as a heatwave across the country has sparked high temperatures.

When the air temperature exceeded 44 degrees Celsius in İzmir, Muğla and Antalya provinces on the Aegean and Mediterranean coasts, public beaches, hotels and swimming pools were flooded by residents who wanted to cool off.

Public beaches in summer towns such as Bodrum, Marmaris and Akyaka were overcrowded despite the call to comply with social distance rules.

In the Mediterranean provinces of Adana and Mersin, where the thermometers reached 45 degrees Celsius, calmness was observed in squares, streets and parks due to the temperature and high humidity.

As many citizens spent the weekend at seaside resorts, those staying in city centers, especially children, swam in irrigation canals to beat the heat.

However, a 40-year-old man swimming in the irrigation canal in Adana's Seyhan district died by drowning.

In Istanbul, where the weather is more bearable compared to coastal cities, young people who are exhausted from heat jumped from the Galata Bridge to the sea to cool off.

High temperatures are expected to continue to be effective across the country, according to the latest evaluations by the Turkish State Meteorological Service.