Cyprus says ready for dialogue with Turkey but not under threats 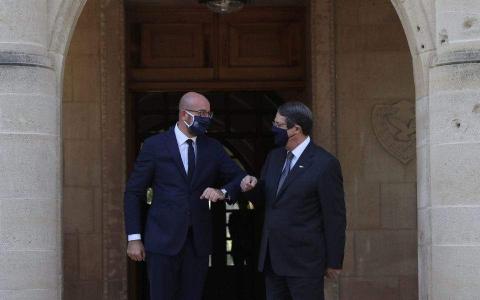 Cyprus is ready to engage in dialogue with Turkey to resolve differences but not under threats, the Mediterranean island's President Nicos Anastasiades said on Wednesday.
"Yesterday unfortunately a Turkish navtex to expand illegal drilling by the Yavuz vessel was extended when at the same time a series of initiatives are ongoing that seek an end to Ankara's unlawful actions and de-escalation," he said, after a meeting with EU Council President Charles Michel in Nicosia.
Anastasiades said Turkey was continuing its provocations in the Eastern Mediterranean, after it extended the operations of its energy drill ship in disputed Mediterranean waters off Cyprus until October 12.

Michel described the situation in the East Mediterranean as "grave" and said that "the European Union stands in solidarity with Cyprus."

"I believe we must be very firm when it comes to...