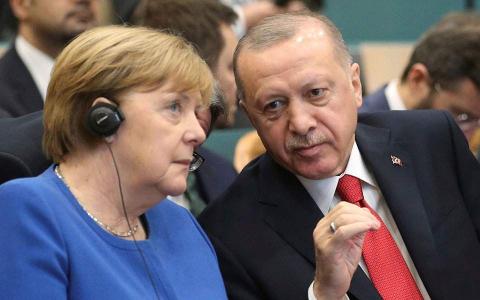 Turkish President Recep Tayyip Erdogan discussed tensions in the eastern Mediterranean with German Chancellor Angela Merkel in a teleconference on Wednesday, according to several Turkish media.

Erdogan told the chancellor that, as long as there is a constructive and  equitable approach on the eastern Mediterranean, disputes can be resolved through negotiation.

He also said European states should be fair and consistent, adding that Turkey will continue implementing its active policy for its own rights.

Merkel is keen to see the two countries engaging in a dialogue before the crucial EU summit which will discuss recent developments in the Eastern Mediterranean.

Merkel spoke on the phone on Tuesday with Greek Prime Minister Kyriakos Mitsotakis and she reportedly agreed with his consistent position that dialogue can only start if Ankara stops provocations...