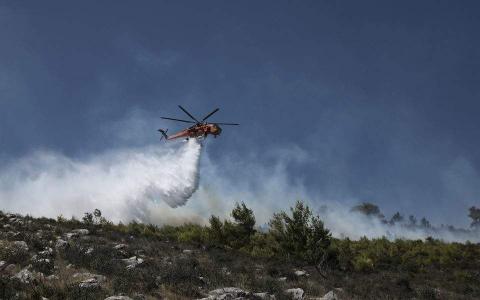 The Greek fire service beefed up its presence in protected forestland in the northeastern region of Evros on Wednesday morning as strong winds fanned a wildfire that broke out on Tuesday afternoon.

More than 100 firefighters have been dispatched to the area of Melia near the town of Alexandroupoli, along with 24 trucks, two water-dumping helicopters and two airplanes. Municipal crews and dozens of volunteers are also helping battle the blaze.

Alexandroupoli forestry chief Giorgos Pistolas told the Athens-Macedonian News Agency (ANA-MPA) that firefighters were able to prevent the flames from reaching the village of Nipsa overnight.

"By expanding existing roads and trails with the necessary interventions so they could act as buffer zones near the national park's reservoir, the fire was unable to reach Nipsa, which is out of danger right now," Pistolas told the...